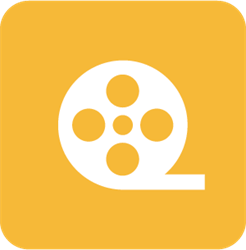 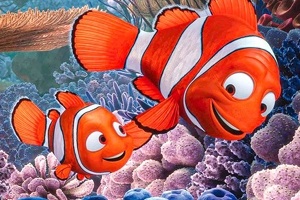 Last month was the culmination of the Summer of Surprise – four movies that surprised me in some way with the fourth one being a negative surprise. So now we begin another series of four films dealing with fathers. It was my father’s birthday earlier this week and we are going to look at four varying films that have fatherhood as an important element. We will start light and move into some heavier stuff and focus on my highest rated fully animated film – Finding Nemo (2003, dir. Andrew Stanton).

It is hard to believe today that in 2003, Pixar Animation Studios was not the juggernaut it is today. Sure, Toy Story was a surprise smash, but they seemed to struggle a bit following that magic until Monsters, Inc. in 2001 and their best offering (and most successful at the time in terms of box office) with this tale of Marlin (voiced by Albert Brooks) the clownfish whose only surviving child from a barracuda attack is Nemo (Alexander Gould). Marlin understandably is a tad overprotective. This leads Nemo, who has one smaller fin that further causes Marlin to be concerned about his ability to make it on his own, to take an unnecessary risk to prove his courage and he is captured and taken to a fish tank. There we meet most of the fun supporting characters that were the hallmark of Pixar at the time. Marlin sets off to find his son and meets Dory (Ellen DeGeneres), a blue tang with short-term memory problems, along the way.

The only reason this film is not considered one of the all-time father/son movies is because it is animated and too many people do not take animated films seriously. You get to watch Marlin go through some harrowing adventures (my particular favorite of these is East Australian Current where Marlin learns that it is okay to relax a little and let your kids figure some stuff out on their own). You see Nemo develop some additional courage with the support of his fish tank buddies. And you also get arguably the greatest voiceover performance in animation history from Ellen DeGeneres. (Seriously, watch the five Oscar-nominated performances from supporting actresses in 2003 and tell me DeGeneres is not better than all five.)

I watched a documentary on the making of this film and found a new appreciation for the work of animators. The amount of effort and research that goes into something as seemingly unnoticeable as lighting is staggering. It is fairly common now to find short documentary pieces on things like this (check out The Museum of Science in Boston or the Frozen 2 series on Disney Plus for two great ones), but I was completely unaware of the work that an animated film requires 18 years ago.

If, somehow, you have not seen Finding Nemo by now, what are you waiting for? If you have seen it, watch it again and try to focus on the things you are not supposed to watch. The background is so layered and interesting throughout while also constantly changing to both portray accurate views of the ocean at different depths and also to enhance the story being told. Additionally, go back and REALLY pay attention to the performances to see how much nuance and emotion you get from each and every one. In addition to DeGeneres’ stellar work, you get brilliance from Brooks, Willem Dafoe, Allison Janney, Brad Garrett, and many others.

FUN FACT – Megan Mullaly was initially cast in the film. She showed up to record her dialogue and producers then learned that her voice was not naturally high and whiny as her character from “Will and Grace.” They asked her to do that voice. She refused and was fired.

JustWatch says that Finding Nemo (like all Pixar movies) is available to stream on Disney Plus. You can also rent or buy it just about anywhere.